This Facebook post attracted quite number of likes and comments. Many curiously queried how I can get Oscar trophy.
I have been working in reinsurance/retakaful industry, with five employers (so far), for close to two decades now. You could be famous in many ways in this industry, but winning Academy Award? Seriously..? Ok, folks. Relax… let me tell you the story behind this ‘great’ achievement.
My current employer, Swiss Re, has annual internal conference called Asia Days. It’s a two or three days event for us in Asia. Not everyone can participate. You need to be appointed or selected based on certain criteria. I was selected to join last year event in Mumbai, but not this year in Tian Jin, China.
As part of Asia Days 2017, the committee organized short video competition for all Swiss Re offices across Asia. Each video is required to carry one of three given themes i.e. Connect, Inspire and Act. We have nine offices in Asia, so there will be three videos for each theme. Swiss Re Kuala Lumpur is given theme of Connect.
The objectives of the video are clearly stipulated by the committee. It is to show how Swiss Re KL connect in new environment – both internally and externally, to portray the uniqueness of Swiss Re KL and to educate through entertaining video. All other specs of the video are also clearly defined such as its duration, how and when it would be shown during the event etc.
Despite all clear instructions, we found this project is pretty tough. Swiss Re KL is such a small office, only fifteen of us, and everyone seems to be busy all the time. Pressures come from all directions. Days passed without any idea popped up. 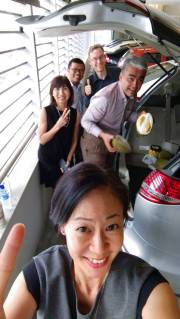 I then reach out to my 12-year old son, Zaki. He’s the funniest at home, hopefully he has an idea on story line.  I caught him for an interview after dinner.  Here is his recommendation Zaki’s movie idea

Sounds great, isn’t it? Yea, but when I played back Zaki’s idea in the office, we immediately realized that it probably take a group of Hollywood professionals to translate it into movie. It’s simply too heavy.

All we need is a light short video that can be starred and produced by a bunch of amateur like us. If we need help, not more than one or two freelance film makers.  That’s it.

We were stuck there. Many days passed without anything happened, but a long silence. Until one day someone realized that submission deadline is around the corner, we had only a few days left. Giving up and telling the conference committee that we are not in is definitely not an option.  Don’t ever think about it. You know, a company is not a democracy. In desperation, we locked ourselves in a meeting room. Forget about all other deadlines, focus on this video.

Long story short, under such a massive pressure, the power of last minute come to help. Thanks God. We managed to come up with a light and modified version of Zaki’s original idea, yet funny and powerful (hopefully). Rough story line was then drafted.

The problem now is how to transform that idea into a three-minutes video in three days. Luckily, one of us knows a small production house that can do it in short notice and realistic budget. We engaged them immediately. Next day two young men, Joe and Happy, came to our office. Story line was fixed, script was finalized and actors were picked. Most of properties were provided by them. One of us, Nizam, was tasked to buy durian. We need one, but he bought three.

The whole day-2 was shooting day. We received the first cut on the day-3.  Final version was agreed after one round revision only. Not perfect, but we were running out of time. Click this link to watch the video Swiss Re Boleh

Bengalore office unsurprisingly won the best video. KL office is not to bad. The scientist in the video won the best actor. Hence the Oscar trophy. Our video is also praised for having strong story line.

Now, what happened to durians after the shoot? Most of us in the office are gifted with ability to enjoy durian. Two last pictures in this story tell you how durians ended up in the parking lot.