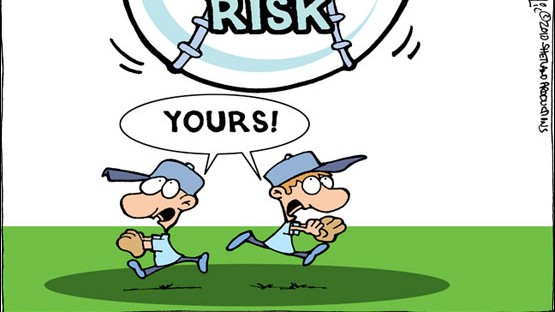 As promised in the previous article Why do we still need Sharia compliant insurance?, let us now discuss the reasons why conventional insurance is not acceptable by Shariah even though it plays very noble role and several legally recognized fences have been created to protect it from falling into gambling or speculation.

Let’s refresh our memories on the definition of risk itself. Article What is risk? has defined risk as the uncertainty of loss. Underline the keyword of ‘uncertainty’.

Now, if we combine the two discussion above, we shall arrive at conclusion that insurance is a contract of sale of uncertainty, or buying and selling where uncertainty is the commodity being traded. Aha … I hope you are with me, begin to see things getting more interesting, as this is really the bottom of the issue of conventional insurance from Shariah point of views.

If a contract of sale and purchase contains any element of gharar (uncertainty), then the contract is not in line with Shariah. It can be considered haram (forbidden or unlawful) if magnitude of gharar is beyond tolerable level. If the gharar or uncertainty even becomes a subject matter or substance that is being traded, which is exactly what happens in an insurance contract, the magnitude of incompatibility with the Shariah is even bigger and lead to it’s unlawfulness (haram).

Take a moment to see how Shariah regulates prerequisites of the subject matter of a commercial transaction from two sources below.

Risk or uncertainty is definitely unable to meet such requirements.

As to gharar, it indeed has many negative connotations, including uncertainty, deception, risk, hazard, ignorance and so on. Below are definitions of gharar according to some scholars:

The existence of gharar brings any party in the contract to be in a unbalanced or unfair bargaining position. They are unable to make decisions based on valid information (informed decision) due to lack of understanding the characteristics (attributes) of the subject matter or consequences of the agreement.

I do hope the above discussion has shed some lights on the main issue of (conventional) insurance from Shariah perspectives. Under Shariah, it is very clear that the sale and purchase must be executed on the basis of Ridha (genuine sincerity of both sides) which can only be achieved with full transparency from both parties so that doubt or uncertainty can be minimized, if not completely removed. In short and simplest words, tell the truth and don’t lie. However, it impossible to achieve full transparency in insurance contract because the subject matter being traded itself is uncertainty. Although the two parties sincerely do not want to lie, they are still unable to provide definitive descriptions or facts on the subject matter, simply because they do not know.

That’s it for now. We shall discuss usury and maysir in the next article.

2 thoughts on “11. Why is conventional insurance not in line with Shariah? (part 1)”